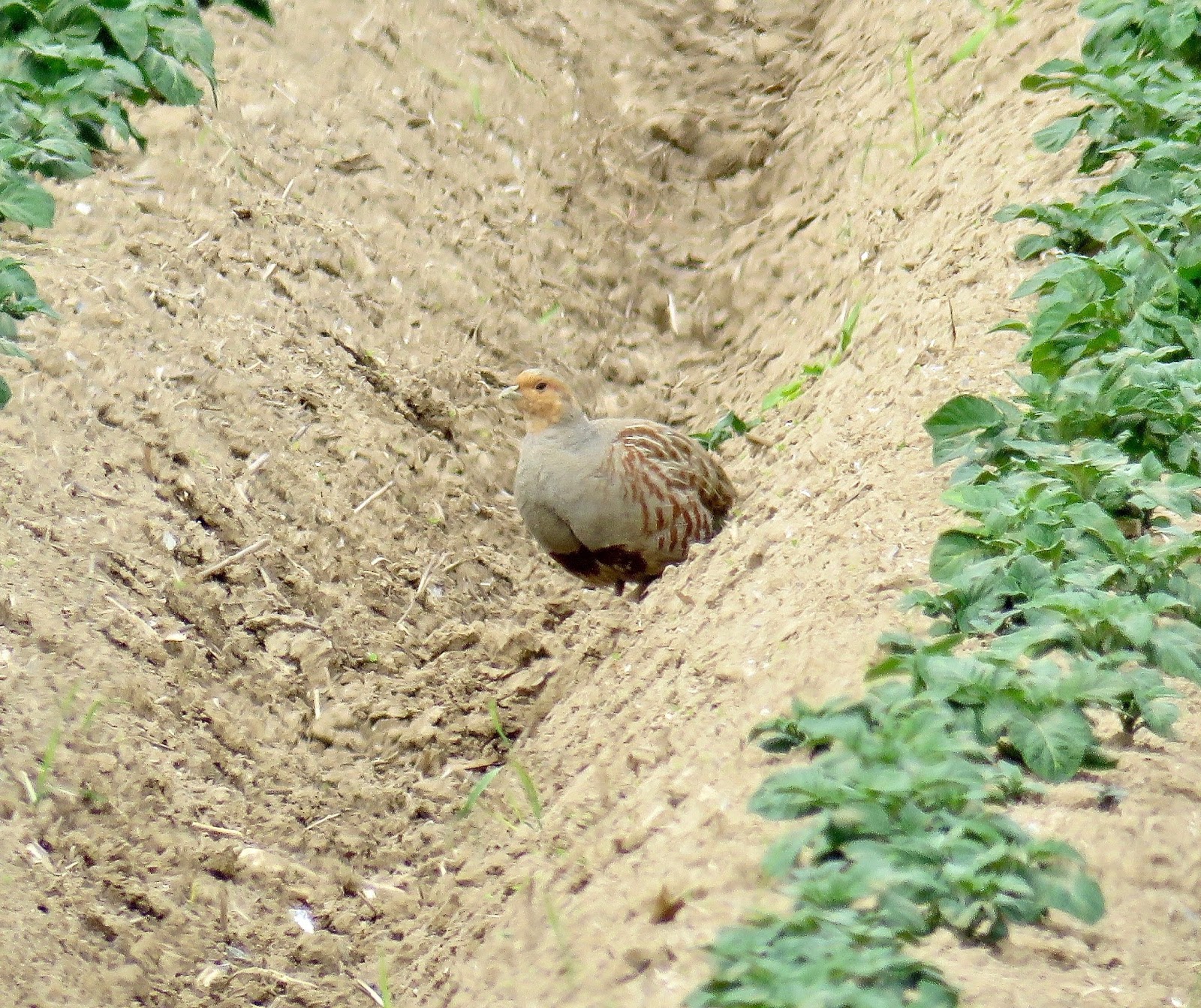 Having been birding across the 'uber patch' since 1974, plenty has changed. Some bird species have gone altogether, others have arrived. Counts yo-yo, migrants arrive earlier and stay later (or do they?) What follows are some examples of the winners and losers from 'my' part of north Surrey. All the following data is compiled from my own personal observations.

Recorded throughout the year, although in smaller numbers during the summer months
The first records were of two birds flying over Beddington SF on 29 May 1977 and two birds over Cheam on 6 July 1983. It was not until the early 1990s that this species became commoner in the area and overflying birds were not the rarity that they once were. Even so, they are not seen annually from my garden in Nork, Banstead.  Peak count of 20 on 3 January 2009 and 1 January 2013, both at Holmethorpe. Any sizeable waterbody will hold them, whereas they really were a prized sighting 30-40 years ago.

Little Egret WINNER
Increasing local winter visitor and passage migrant
My first local record was of a single at The Moors, Holmethorpe  on 22 April 2007, with further singles at the same locality on 4 May 2008 and 3 January 2009 from which date records became frequent in the Holmethorpe area, with counts of between 1-3, peaking on 26 April 2009. These counts refer to birds present on The Moors, at Mercer’s Lake and along the Redhill Brook on Mercer’s Farm. Since then birds have been recorded on a regular basis at Beddington SF (2010), normally as singles but with two on several occasions, and readily seen during the winter months at Hogsmill Open Space, Ewell since 2015, with 1-3 birds recorded. Also recorded at Priest Hill, Ewell (2017).

Sparrowhawk WINNER
Local breeding resident
Back in the mid 1970s until the mid 1980s this species was scarce in the area. The year-long study at Seears Park, Cheam only produced a single record on 20 April 1983. From the late 1980s this hawk underwent a steady recovery, so much so that it was seen on an almost daily basis in Nork, Banstead during the early 1990s onwards. Of note were a party of six birds on 17 April 2006 on Epsom Downs that circled up high and out of sight, plus six on 17 October 2010 at Beddington SF and the same number on 7 April 2015 at Canons Farm, Banstead.

Common Buzzard WINNER
Increasing local breeding resident and passage migrant
A local success story mirroring the fortunes of this species in the south-east of England. It was not until 28 September 1999 that I recorded the species, at Holmethorpe. The next was a single on 30 January 2000 at the junction of the M25/23, followed by another on 23 September 2000 at Nork, Banstead (during the Honey Buzzard influx). Following one on 15 July 2001 at Dawcombe, there were singles on 12 May 2003 at Buckland and 25 Oct 2003 at Reigate Hill. In 2005 sightings became much more frequent, mostly in the Holmethorpe, Reigate, Banstead and Walton-on-the-Hill areas. Even at urban sites such as Beddington SF this is now a regularly seen species. It is not unusual to see between four and seven birds in the air together, with movement having been observed with some style as 17 flew mostly eastwards on 30 August 2008 along the north downs slope above Merstham and at least 26 being present at Canons Farm, Banstead on 5 April 2016, with at least 18 of them moving NE to SE. A number of breeding pairs are established in the south of the area, these being recorded as far north as Banstead and Epsom Downs.

Peregrine WINNER
Recent colonist, winter visitor and passage migrant
My first record involved a single on 7 December 1993 over Sutton followed by singles at Holmethorpe on 22 October 1995, 1 January 1997 and 28 September 1999. It was not until 25 March 2005 that the next was recorded (also from Holmethorpe). In 2007 a series of sightings were made in Sutton, centred on the tall office blocks close to the railway station, involving 1-2 birds. Breeding certainly took place here between 2009-16, with up to four young being fledged in a single year. During this time the first records were made from Canons Farm, Banstead; Nork, Banstead; and Beddington SF. Breeding did not take place in 2013, but birds were still seen in the area, including Sutton and Epsom Downs. A pair have also taken up residence in the Epsom area, during which time a single was seen at Priest Hill, Ewell  (2017).


Grey Partridge LOSER
Former rare breeding resident
Between 1976-78 I could still find this species at Beddington SF, with at least one pair breeding, a peak count of 9 being made on both 16 and 23 October 1977. My last record there was on 19 March 1978. Small numbers, up to six, could be found at Holmethorpe until the late winter of 1992-1993, when a single on 6 February 1993 was the last record. (Pictured above, not alas, locally)

Herring Gull WINNER
Common winter visitor, passage migrant and increasingly present during the summer
Since I started birding in the area this species has increased greatly. Landfill operations at Beddington SF has become a magnet, with counts of 6,000 on 22 October 2010; 4,500 on 27 December 2010 and 2,000 on 6 November 2010 and 8 January 2011. Winter numbers at Holmethorpe have also greatly increased, as evidenced by counts of 2,500 on 18 January 2009; 2,250 on 6 January 2017; 2,000 on 30 January 2010 and also 12 January 2013. In recent years it has summered in small, but growing numbers, with 1,000 still being present on 29 April 2011 at Beddington SF illustrating the species reluctance to vacate the region as spring winds down. Daytime roosting on playing fields is a regular event, with the highest count being 900 at Priest Hill, Ewell on 1 January 2015.

Ring-necked Parakeet WINNER
Increasing breeding resident
From being a rare curiosity this species has become an ubiquitos component of the local fauna, its raucous screech and gaudy green plumage as much a part of the scene as almost any other bird. My first local records were from Epsom and Cheam, both singles in 1976. The next sighting was not until a small flock in Reigate in 1999. At this latter site a roost soon established. At the turn of the millennium the number of places recording this parakeet and their growing numbers increased, with first records from Epsom Downs (2000), Nork, Banstead (2001), Nonsuch Park, Ewell Village, Gatton Park and Holmethorpe (2004), Headley (2006), Mickleham (2007) and Beddington SF (2010). Highest counts (all of birds leaving, or going to roost) are 500 on 25 December 2014 at Redhill; 300 on 6 January 2010 at Beddington SF; 284 on 6 November 2010 at Beddington SF; 200 on 1 January 2013 at Holmethorpe; 150 on 14 November 2010 at Beddington SF; 125 on 10 October 2009 at Holmethorpe; 115 on 26 June 2015 at Nork, Banstead. You cannot go anywhere in the area without hearing these noisy interlopers.

Lesser Spotted Woodpecker LOSER
Scarce breeding resident
First recorded at Bury Hill Lake, Epsom Common and Beddington SF (1975), Headley Heath (1977), Cheam Village (1978), Beddington Park (1986), Banstead Woods (1979), Oaks Park (1980), Nork, Banstead (1990), Holmethorpe (1991), Nonsuch Park (1998), Box Hill (1999), Reigate Heath (2012). The decline of this woodpecker was slow to start with, then sped up after the turn of the millennium. This species used to be much easier to come across in the northern part of the area in the mid-to-late 1970s and could have been regarded as an expected part of most birding trips. Its loss from such former strongholds as Epsom Common and Banstead Woods has been hard to take.
at January 17, 2018

When you get to my age Arjun - and if you keep at the birding - you will have created your own!

More winners than losers? How can that be anything but a positive? All the best - Devil's Advocate - Dyl

As you know Dyl, total bird numbers massively down though.

Birds seem to mirror the state of our freshwater fishes - Carp, Wels Catfish and Zander (all introduced alien species) flourishing. Minnows, stickle-backs, Stone Loach, Bullheads and native Crayfish, but memories in many waterways. A very sad indication of the attitude towards our environment by successive political and business leaders within the UK. I await your passerine summary with anticipation - Dyl