The day of the Hawfinch 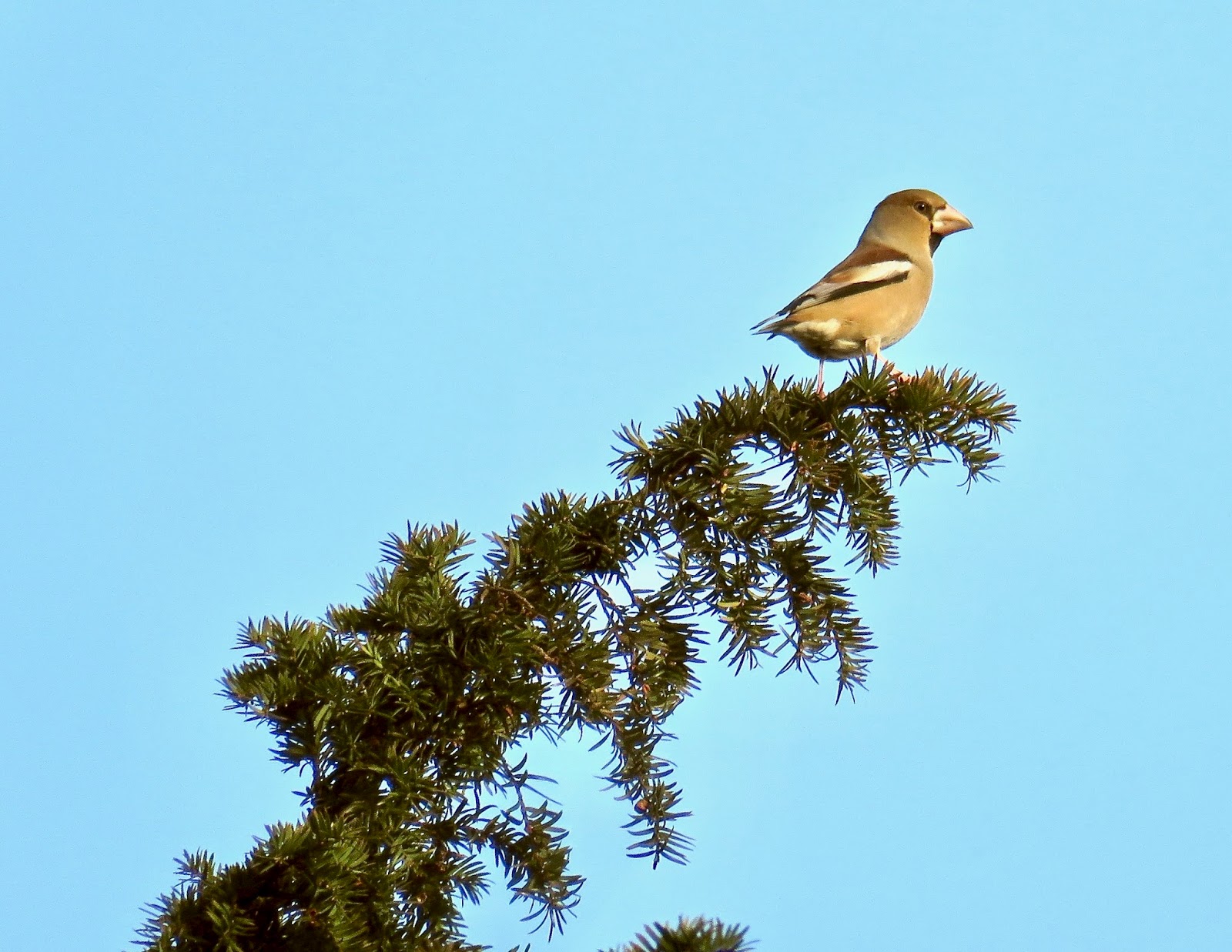 Warning: if you have had enough of these big-billed finches, do not continue reading...

After yesterday's delights I was up for some more Hawfinch action, and arrived at Juniper Top just after 08.00hrs. The birding started well, with two Hawfinches flying up from Juniper Bottom and alighting in the area of woodland that was so productive 24 hours earlier. After waiting for twenty minutes (to see if any more birds came up from the valley) I entered the woods and headed a short way in to where most of yesterday's birds had performed so well. Although there was little calling, a tight group of 60 birds were located sitting passively at the top of several beech trees. They slowly started to drop down into neighbouring Yews, then proceeded to move away. By now they were calling frequently and were easy to follow. Some 100m further on a stand of Larches had attracted the flock, and now it became obvious that the original 60 had joined others. The calling became incessant, a white-noise of 'ticks' and 'sips' - it could be described at times as a frenzy. I stood underneath the tall conifers and watched as the birds moved further into the woods. By now I was convinced that there were 'three figures' involved, but needed to be able to get a better viewpoint to make a meaningful count.

I lost the flock for maybe 10 minutes, but located it (thanks to the calling) some 200m further on. As I was facing into the sun (and wanted to get on the leading edge of the flock) I skirted round the birds and hid at the edge of a clearing that was lined with beech and yew. My timing was ideal as the leading birds started to appear in front of me, moving through the canopy not unlike a tit-flock (or rainforest bird wave!) This enabled me to get an accurate count - groups of 10-20, singles, one clot of 40 - my mind adding up, careful not to recount any bird that might double-back. After eighty had moved through I became a touch excited, then 90, the magic 100... but still they came. The birds were moving directly over me and to my left, heading deeper into the wood. It was now that a single flock of 35 announced themselves, having been hidden further down the eastern slope and attached themselves to this magnificent mother ship of Hawfinches. By now the noise was at its height. I was experiencing a 360 degree immersion. The flock slowly moved away, melting into the woodland and out of sight. My notebook read 135. I know that I couldn't possibly have seen every bird that went through, even though my viewpoint was quite good - there was too much vegetation in the way to see them all. So that count of 135 is really too low...

But I could still hear the odd bird calling, back where I had started, so quickly made my way there, where a further 30 birds were found. These were certainly not part of the flock. And finally, after leaving these birds happily diving in and out of yew trees, a further flock of 40-50 birds were on the edge of the wood at the very northern end of Juniper Top. These birds, just like the others, were finding Yews to their liking, frequently perching on top of nearby beech and oak allowing for easy observation.

So, how many? There could not have been any fewer than 200 and there were most probably more. I am aware that such a count seems ridiculously high. 'Birds in England' (Brown and Grice) give just one count of 200, at Epping Forest, in Essex on 28 Feb 1942. 'The Birds of Surrey' (Wheatley) refers to 'hundreds' being present at Leatherhead on 20th February 1927. There have certainly been a number of three-figure counts made during this current invasion. But my count is an honest and, I believe, accurate one.

By 11.30hrs the birds became harder to find, and there were spells when I wasn't able to locate any. Some birders arrived and left empty handed. About mid-day a flock of 40-50 were being faithful to the north-western edge of the wood. I left the site at 13.30hrs having not seen or heard a bird for an hour. Just like the Juniper Bottom flock of 2013, maybe these birds have an early morning habit.

Visiting: park in Whitehill Carpark (Headley Road) TQ175529. Walk south-east up the open slope until reaching the summit, Juniper Top, and go through the only gate. Now you will be at the woodland edge. Turn right along footpath and after 100-200m start to check trees on the slope to your right. Back at the gate, turn left and take minor path that wiggles along the top of a slope. This path, for maybe half-a-mile has been excellent for the past two mornings. The large flock was lost to the woods at this furthest point and they extend much further - beyond them is a patchwork of similar habitat in which a Hawfinch flock could easily hide. Good luck!
at January 30, 2018

I clicked on it- now going to twitch them!

Thanks for the write up. Have you heard whether the birds at Newlands Corner are easier to photograph & if so where exactly they were seen? Staying in Reigate for a week where as a child had counts of up to forty Hawfinches in the garden & nearby at Caterham. But they died out 20-30 years ago. Thanks for any help. Robin robinchittenden@hotmail.com

Lovely photo. Sounds like they performed well for you!

They did Bill. Hopefully you'll get a few on your new island this spring.

Wow! Bird of the winter. Where are you now Mr Waxwing?!

Neither did I Lucy!

Wow. brilliant stuff, and a great write up. Congratulations on a fantastic day.

Thanks DD, it was one to remember.

Just simply brilliant stuff, Steve. May head up there on Thursday morning. Hope a few stay in the area. Such fascinating birds!

Good luck Neil. The big flock would appear to be roving, although c40-60 birds appear to be more site faithful.

Brilliant account! Very envious, what a magical experience. You seem to have the knack for finding this species.

Thank you Stephen, although in reality they find me.