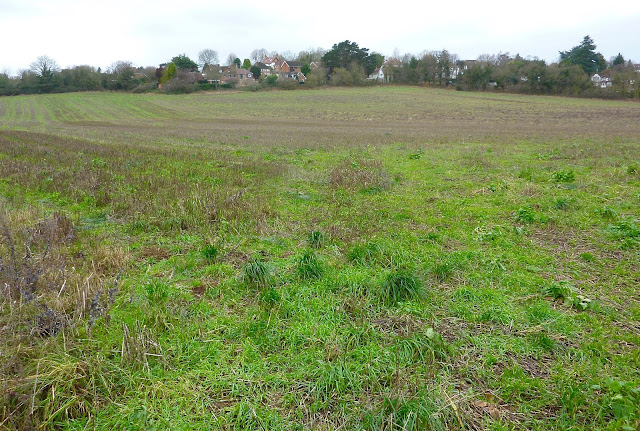 There has been some mumbling in the ranks that this blog has, so far this year, neglected birds. So today's post will start off with ornithological news - after all, I aim to please.

A couple of hours spent at Howell Hill SWT reserve rustled up a flushed Woodcock (from roughly where the Knapweed Broomrapes will pop up later in the year) plus a feeding frenzy in the large open fields that comprised 1,000 Woodpigeons, 150 Stock Doves and 100 Jackdaws. Now, back to the plants...

My main aim at Howell Hill was to record some of the cotoneasters that are present. The reserve has quite a list of them and I am but a rank amateur when it comes to identifying them, but with the help of a number of reference books I'm fairly confident that I found Wall (horizontalis), Tree (frigidus) and Himalayan (simonisii), along with Firethorn (Pyracantha coccinea). But it was the neighbouring fields that got me excited (image above). These appear to have been abandoned and even for early January held plenty of botanical life, including Common Field and Grey Field Speedwell, Turnip, Black Mustard, Hemlock, Field Pansy and Radish (all in flower). There were plenty of crucifers in vegetative form that I left well alone. It will be intriguing to see what appears here as the months progress.
at January 04, 2018

Steve, do you know Eileen Taylor? She's been voluntary warden up there for decades. I bumped into her and the late Ken Page some years back, we managed 12 species of Cotoneaster in the space of a couple of hours. Ken was a legend, he recognised most at a glance. Eileen will probably be agreeable if you want a tour of the site. The Epsom Common Association have her details, if you don't already know her. And do say hello to the ol' gal from me please!

Yes Seth, I do know her. I last spoke to her in the summer at Priest Hill. Part of my quest this year is to try and identify these species myself rather than be shown them, although if our paths crossed at the right time then of course I'd be more than grateful to be given some pointers.