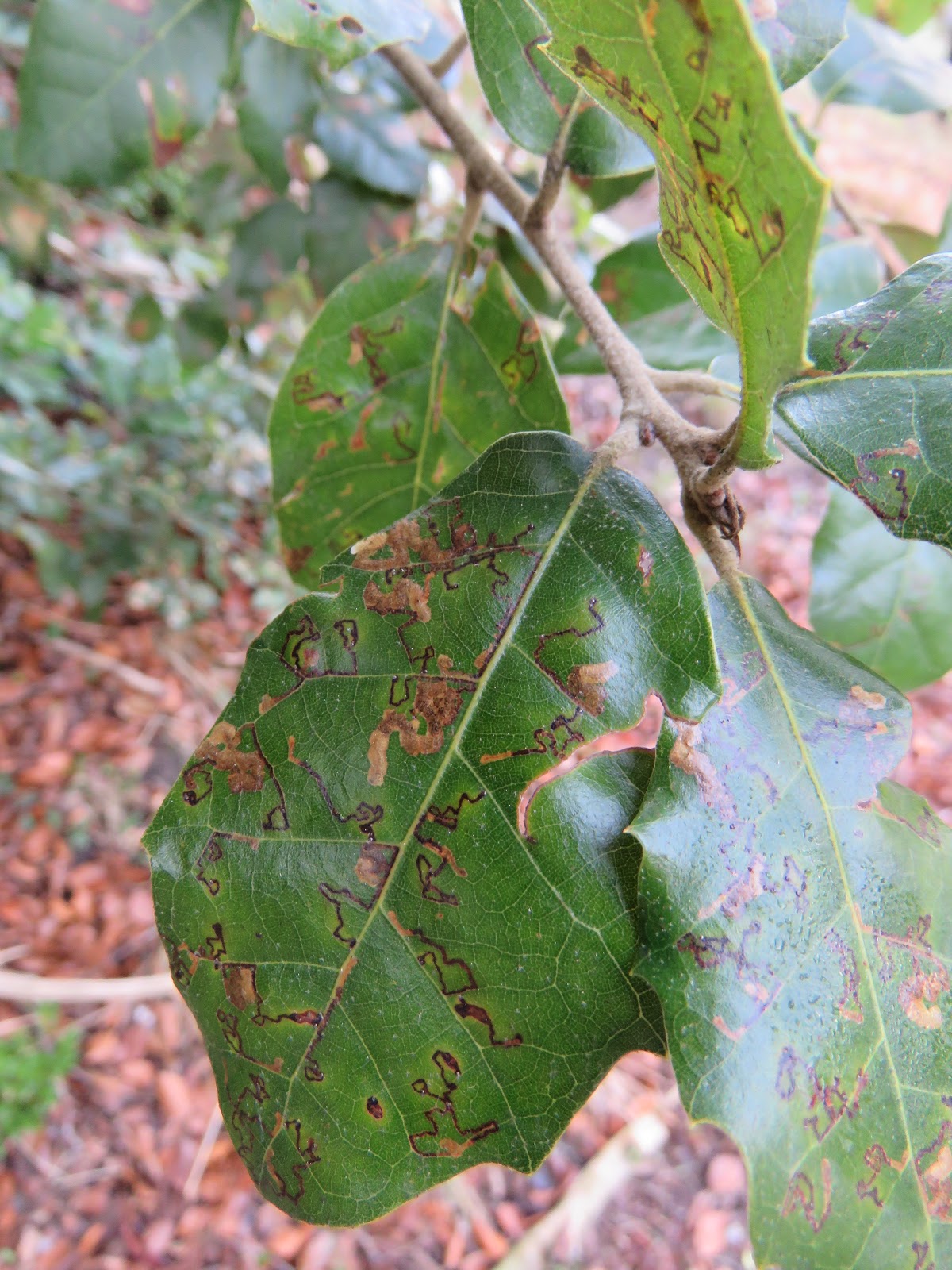 Yesterday morning saw another visit to the banks of the River Mole, between Mickleham and Westhumble. Bird-wise it was very quiet, no flocks, little singing or calling, all-in-all hard work. Even the expected Little Egrets were lethargic, all nine huddled up roosting in a farmyard tree. Thankfully the moths came to the rescue.

Armed with my copy of 'Langmaid, Palmer and Young', and thanks to a tip-off from Seth and Skev, I approached a Holm Oak in the knowledge that I should be able to find the feeding/mining signs of several species of moth. And so it proved. The top photograph shows clearly the larval mines created by the micro Ectoedemia heringella - the thin, dark meandering scribbles. There were also signs of feeding by two other species, Stigmella suberivora and Phyllonorycter messaniella. Bouyed by such success I then visited a wooded bank (within Norbury Park) that is clothed in Hart's-tongue Fern. The image below would suggest that Psychoides verhuella has been feeding on the fronds, although I couldn't possibly rule out Psychoides filicivora. According to my 'Smaller Moths of Surrey' the former species has been recorded in this area, but not the latter, which has only been found in the north of the county. I'm not competent enough to tell the difference. There are two websites that are excellent for checking any leaf mine against to try and discover which moth (or fly) has created them. Here are the links: 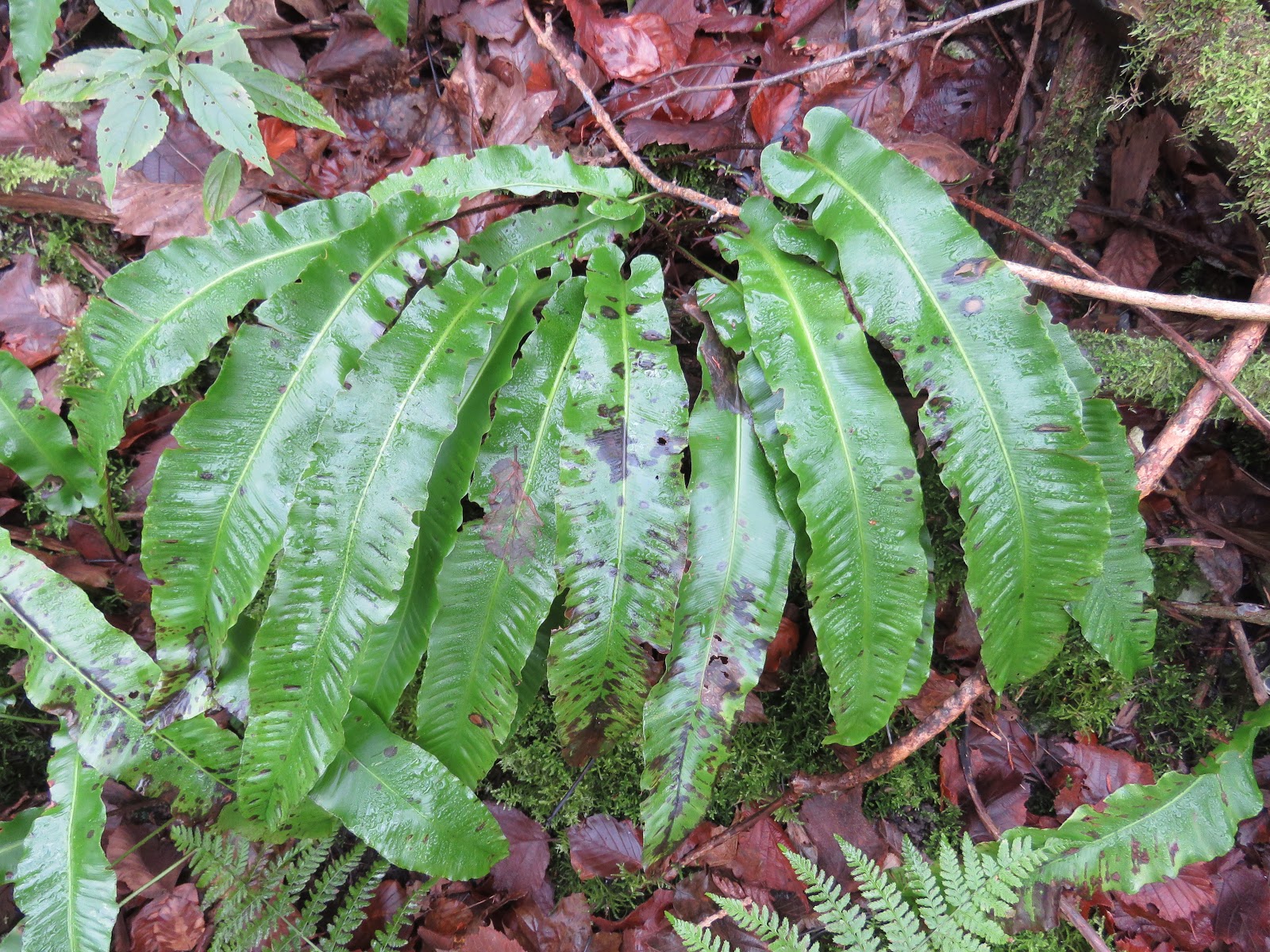 I did find one adult moth, and a species that I do not see all that often nowadays - an Early Moth (below), found resting in the A24 underpass at Burford Bridge. According to the newly published 'Atlas of Larger Moths', it has declined 47% in distribution and 90% in abundance since 1970. Long gone are the days when I used to find up to 20 of them huddled together at Banstead Station during the winter. 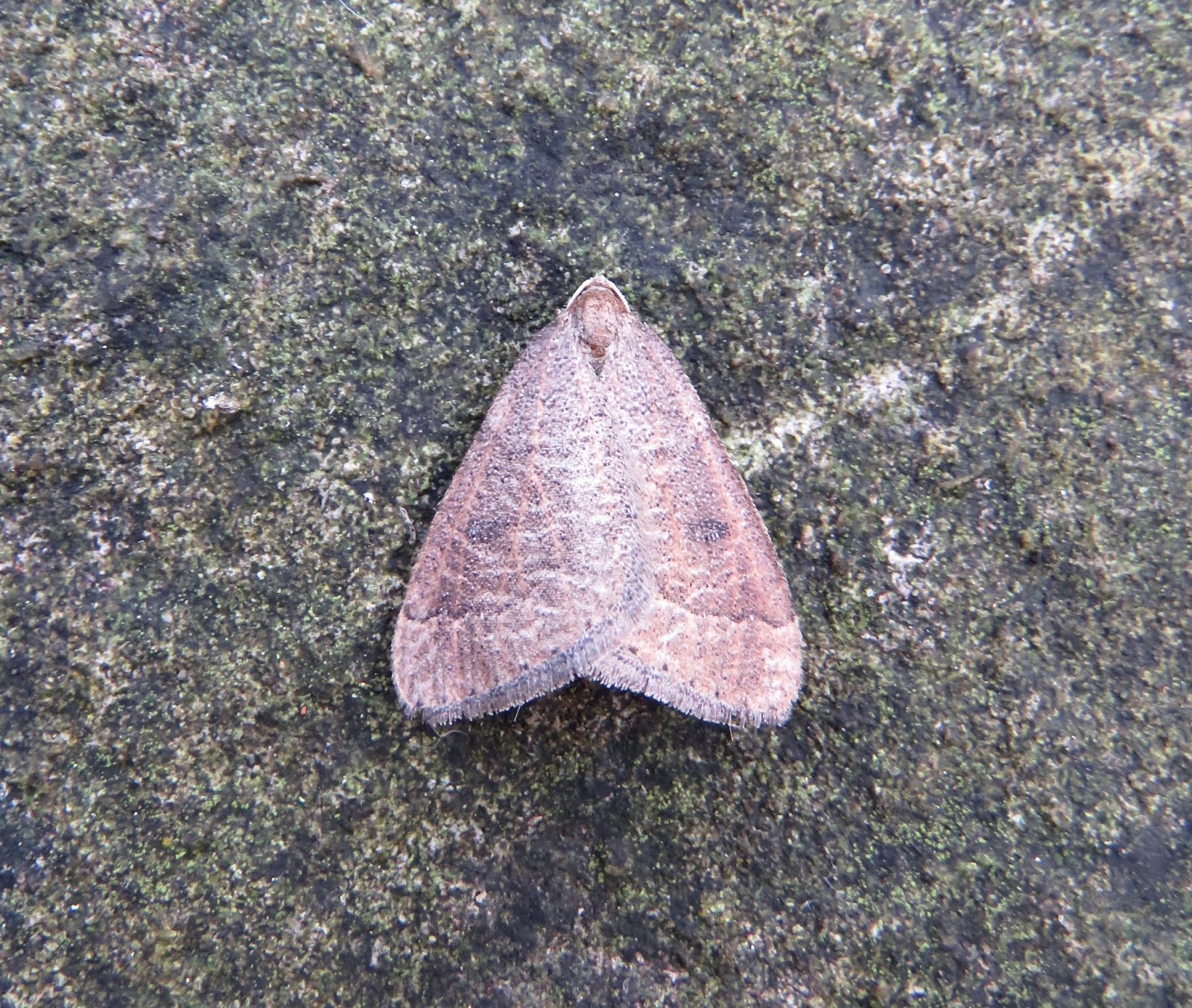 Skev said…
Best to have a look on the underside of your fern, find random blobs of sporangia looking out of place and have a look for the larva - easily separable then (verhuella has a black head and prothoracic plate, light brown on filicivora). Or just bung a leaf in a pot and see what comes out ... https://skevsblog.blogspot.com/2019/05/tineid-tick.html
21 January 2020 at 21:56

Steve Gale said…
Thanks Skev, I did look for the ‘frassy’ cocoons but they were sadly lacking. Either that, or I did not look hard enough!
22 January 2020 at 07:33

Billy Dykes said…
Not the best time of year but next time you're up that way keep an eye out for Ectoedemia agrimoniae mines if you can find any old Agrimony leaves from last season. Saw it on the downs near the Box Hill zig-zag road once. Wayfaring trees in that tiny car park half way up the zig zag road usually have a few mines of Phyllonorycter lanatana on them (again the best time of year but they should be find-able in the leaf litter!)
26 January 2020 at 01:02

Steve Gale said…
Thanks for that info Bill. I've had lantanella on a Viburnum tinus in the garden this month.
26 January 2020 at 13:16